>> When Sofia tricked me into believing I was spending my 30th with her & my boyfriend in a cabin in the woods I was already pretty stoked, little did I know she had a secret hidden up her sleeve. Mainly because..  1) sofia is shocking at organising anything + 2) she cannot keep secrets from me. So this truly was the biggest surprise ever, I’m actually still totally shocked that she managed to pull it off // After what seemed like 13,83625 miles we arrived to Lancashire where I was blindfolded with a bandana + driven up the bumpiest dirt road in the entire world – i was terrified. After being escorted out of the car, I tried to keep my cool but lets face it it’s impossible to not waddle + frantically wave your arms everywhere when your sight has been removed, and suddenly ‘Party Hard’ started blasting in my ears, my blindfold was removed and there was 16 people screaming SURPRISE at me. EEEEEK!!! I was so overwhelmed, excited + emotional that the whole thing was a blur. After drowning everyone in overexcited cuddles I went exploring ‘the octagon‘ cabin – which was seriously epic. BBQ’s HOT TUBBING + SHOTS. just YES. Thank you everyone who made my VIVA THIRTY a birthday I’ll never forget. Love you all – Yer pretty ace. Major kudos to you Sofia – BIG LOVE – but don’t keep another secret from me again, yeh? << 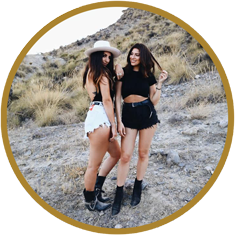